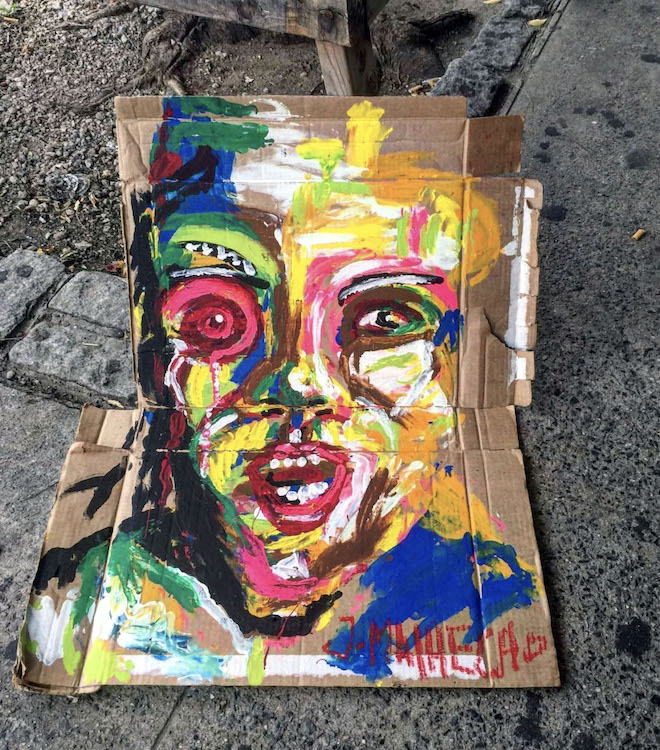 While exploring the streets of Downtown Manhattan awhile back, I came upon a young man at work fashioning a hugely expressive face on a piece of cardboard that he had salvaged from the curb. Intrigued by his distinctly raw aesthetic and choice of canvas, I was eager to find out more about the artist. He introduced himself as J Malhecho and explained that he had come to NYC from his home on the mountainside of Bogota to spend some time with family members who were living here. I had the opportunity to briefly interview him before he returned home.

When did you first start making art?  And what prompted you to?

I began painting just a few years ago. I was 21. My life had suddenly and unexpectedly changed. As I was crossing a street in Bogota, a car cruising by crashed into me. The accident broke my bones and ribs. I couldn’t move. I couldn’t go anywhere. I felt the need to create something…something I could touch.

Had that accident impacted your life in any other ways?

Yes. I stopped using drugs and I stopped drinking. I feel as though my entire mindset changed.

You are working here on found materials. In fact, you refer to your art as “trash art.”

Yes. I am deeply concerned about the environment. I would much rather recycle something that has been thrown out than spend money on a canvas and further pollute the environment.

I’ve noticed that you paint with your fingers.

Yes, I mostly use only my fingers. I love the texture that it produces. Sometimes I use pencils. But rarely!

Have you any favorite artists?

No one in particular comes to mind. I don’t pay much attention to what other artists are doing.

What about cultural influences?

I’m inspired by the natural world that surrounds me. I grew up and live now among the mountains outside of Bogota. The homeless people in Colombia who recycle boxes to earn some money also influence me.

Is there a central or overall theme that ties your work together?

Yes. I create mythical creatures who protect the ecosystem.

Are you generally satisfied with your work? Is it important to you that others like it?

Yes, I am generally satisfied with it. I make art because I love the process. It isn’t important to me that others like it. But I want them to walk away with a message.

How long do you usually spend on a piece?

It depends. Anywhere from 5 minutes to one month.

Have you exhibited your work?  If so, where?

I’ve taken my work to market places on the streets and on the mountains of Bogota.

What are some of your other interests?

Playing the guitar and working on assorted tasks on the mountains.

What do you see as the artist’s role in society?

Art is an international language. It is my way of sharing my reality with others.  It is my way to communicate and to make people think!

Note: Two of J Malhecho’s paintings will be on exhibit in “Alone / Together: A Visual Meditation on Our Times,” from July 15 – August 29 at the Local New York, 13-02 44th Avenue in Long Island City. Several more of his works can be viewed at the opening reception, Thursday, July 15, 6-9pm.

Interview conducted and edited by Lois Stavsky; photos 1-4 Lois Stavsky in NYC; 5 Courtesy of the artist in Colombia